What Is Bitcoin? All You Need to Know About the Most Popular Cryptocurrency | Bitcoin Conference Australia
Buy a ticket

What Is Bitcoin? All You Need to Know About the Most Popular Cryptocurrency 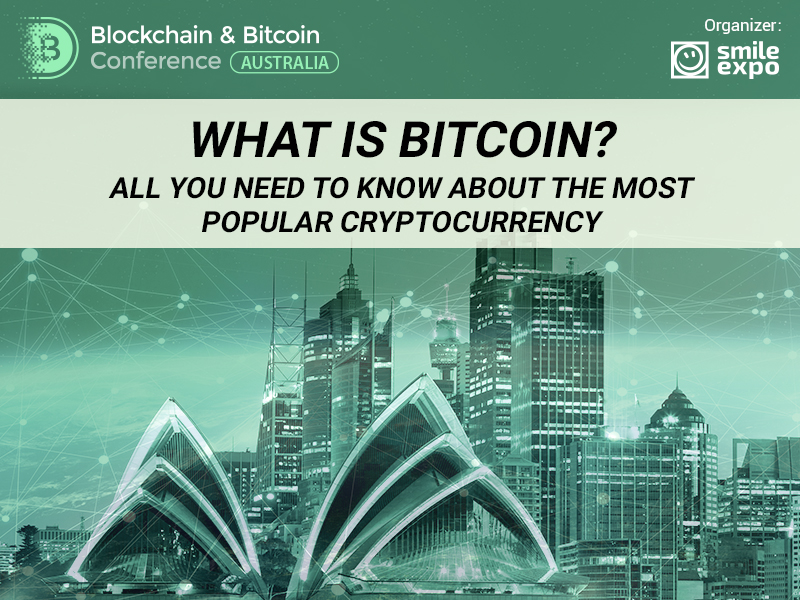 Around 10 years ago, cryptocurrencies appeared and changed the world. By now, they have already revolutionized financial sphere, payment system, and banking industry, and are continuing moving forward towards other different industries.

When people hear the word “cryptocurrency”, Bitcoin is probably the first thing which comes to mind. Everyone is familiar with it but not everyone knows where it comes from and why do people buy it. Let’s get into it!

To put it simply, Bitcoin is the first released cryptocurrency in the world and the most popular one. It is a peer-to-peer system for online transactions with no central authority’s control. This decentralized digital currency works without central bank, and all transactions are held directly from user to user. Bitcoin transactions are transparent and are seen on blockchain, which is a public transaction ledger.

Where did it come from?

Let’s move on to some history. In 2008, mysterious Satoshi Nakamoto created a domain and posted a link to a paper about Bitcoin. A person or a group of people under the author’s name still stay unknown, however, Bitcoin did not stay in shadow. It was released as an open-source software in 2009, and irreversibly changed everything. Since then, its development started. At first, the value of transactions was determined by negotiations between pioneer members of cryptocurrency community. How about buying two pizzas with 10 000 BTC? Yes, it was really done by Laszlo Hanyecz, the first buyer of a good with Bitcoins. It was back in 2010, when the amount of spent Bitcoins was equal to $41. Then, the price was growing. Bitcoin began to be accepted in more and more places and started to inspire the emergence of other cryptocurrencies. What about its price now? We are moving on to numbers.

What is Bitcoin worth?

So, we see that buying two pizzas with 10 000 BTC would be quite expensive, right? Price of Bitcoin has significantly changed since the time it was released. Currently, in 2018, one Bitcoin costs around $10,524 AUD or $8,211 USD. Let’s have a look at the last year’s dynamics of price.

Now, you may have questions “where is stored if it has such a value?”, “how to make transactions?”, “what to do with it?” We will look at it.

How does Bitcoin work?

By adding transactions to a public ledger, Bitcoins are mined. It means that the new ones are created and currently, there are almost 17 million coins in operation. We should remember that the maximum possible amount of coins is 21 million.

Anyone with the mining equipment can become a miner. Mining equipment differs by types and it is up to you which one to choose. But it is important to remember that Bitcoin mining today is much difficult than mining of first Bitcoins, that is why it requires more powerful equipment. It leads to an increase in the consumption of energy and decrease in the level of return. In 2017, for example, it was possible to make a $9 daily profit and $900 year profit by mining, (calculated using ASIC chip Antminer).

What is Bitcoin used for?

Bitcoins can be used all over the world with little transaction time and low fees, and it is globally accepted by a big number of companies.

Currently, you can not only pay for food or electronics, but you can also download movies, games and music in app stores using Bitcoin. Buying precious metals with Bitcoin became popular as well, since this way is very secure, transparent and does not involve any mediator. Moreover, you can travel with Bitcoin! Booking flights and hotels this is being made available by more companies now. Education sphere is influenced as well since even universities providing education for Bitcoins appear.

Bitcoin has entered almost all the spheres of our life by now. Let’s wait for the next changes!